Good News!
A newspaper not written by the lying Jews!

The Secrets of Newgrange, Ireland

About 3200 BC, before the Pyramids of Egypt were built, before Stonehenge was built, the European Peoples already had constructed something more wonderful -- shrines to the Life Force, the Holy Spirit and the physical power of European Man and Woman.

But, you may wonder, what is so impressive about this Irish pile of rocks compared to the pyramids of Egypt or the mud towers of Babylon? However, it is not the structure, itself, that is so amazing, impressive though it is, built internally with massive rocks weighing many tons, during the New Stone Age when the use of metal tools was unknown. What is amazing about this Irish phenomenon is the individual knowledge of spiritual power that it has preserved for the past 5,000 years. All of the European people had a spiritual knowledge superior by far than that of Babylonia or Assyria and even greater than that of Egypt. The European People had direct contact with the Holy Spirit and a direct knowledge of God. And they preserved this knowledge with cartoon-like drawings carved into stone. The ancient Caucasians of Neolithic Europe did not have a writing system but they transmitted their knowledge through such drawings.

Even before they had the use of metals such as copper and bronze and long before they made use of iron and steel, they used their stone tools to built this structure and to house inside of it their holiest knowledge. But do not think that because they were ancient people that they were stupid. They were just as intelligent as we modern people but they lacked our modern knowledge of the world and the cosmos. They understood the sun and moon cycles. And even more, they understood themselves better than we modern people understand our own innate spiritual power.

When the sun rises during the Winter Solstice, for this one day per year, its rays enter the door transom of Newgrange and shines far back into the black interior to illuminate this triple returning spiral once per year. No scientist knows why this symbol was so important; no theologian can tell you its meaning; but you can know it and experience it for yourself -- the spiritual and physical power of the ancient Irish, Norse, Celts and European Peoples -- a Power that manifests from the Universe and radiates outward from the White Man. The secret is so simple that you may laugh to realize that it was there for anyone to see -- but no one looked. 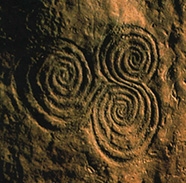 Here at the Bamboo Delight Company, we teach you how to look and then how to see the ancient knowledge that no scientist, no archaeologist, no theologian has been able to ken until now. The first stage on the Path to True Power, is the Returning Spiral within yourself. This Entry Stone at Newgrange declares the Ancient Way. It is the Way to the Holy Spirit of Ancient European Man and Ancient European Woman. It is the Way of Power. But it is so simple, modern people have overlooked it.

Newgrange was a Temple, not a Mausoleum

After several thousand years, the partial remains of only five people were excavated from Newgrange by the archaeologists. So, the facility could not have been a graveyard or mausoleum. It was not a house of death; it was a house of Life and its decorative designs tell us how and why.

But this ancient secret can be found only if you have the courage to look into yourself. Someone who did so, found and then taught that "The kingdom of God is within thee."

But modern people have been so deceived by the blind Christian preachers and so lied to and betrayed by the demon Jews that looking within themselves makes them afraid. Fear not! The kingdom of God is within thee.